Who can be a YOPEY Befriender?

A YOPEY Befriender is a young person who volunteers to visit a care home near their school and befriend lonely residents, many of them living with dementia.

Often we begin with a group visit to the care home. YOPEY will then liaise with both the students and care home to agree on a timetable for when each YOPEY Befriender can visit the care home.

After each visit, each YOPEY Befriender submits a short report of what took place during their visit onto their personal accounts on yopeybefriender.org. In one click, these visit reports can be turned into a printable record that can be included in university applications and shown to future employers. YOPEY staff assess the reports and award digital badges to keep our YOPEY Befrienders motivated. 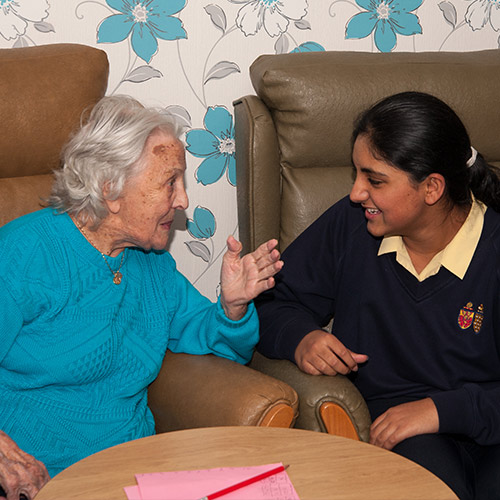 Any school or college can apply

Schools and colleges are welcome to request copies of their students’ Records of Volunteering Achievement to present to Ofsted or other stakeholders.

During their time as a YOPEY Befriender, many young people learn that making elderly friends can be a way to learn social history informally and acquire valuable life skills from fundamental human qualities such as empathy to more practical skills like how to care for someone with dementia.

As a small charity based in Suffolk, YOPEY tends to focus our efforts with groups of students from schools and sixth form colleges in the East of England – Bedfordshire, Cambridgeshire, Essex, Hertfordshire, Norfolk and Suffolk. However, we will consider applications from schools outside these counties and for other age groups of young people and children.

17-year-old Kaylee had a new good mate – 82-year-old Roy who did “some cool stuff in his life. We are good mates, we chat about life and each other’s lives”.

Like many YOPEY Befrienders, Kaylee compiled a life story about her much older friend – basically a scrap book with events from the care home resident’s life.

“As we started on it I discovered just how much Roy had packed into his life,” said Kaylee. “He went to art college, then did National Service, was an illustrator for an engineering firm, went into the hairdressing business, sold advertising and ran exhibitions around the world. He’s done some cool stuff including meeting Arab kings and princesses. ”

Thank you for such a wonderful man

Kaylee says YOPEY Befriender also helped her a lot. “Roy supported me in a way friends my age couldn’t, because he had ‘been there and done that’. When I auditioned for a lead role in a school production Roy’s encouragement helped me get it.”

Roy and his wife came to see Kaylee play Sandy in the musical Grease at her school.
Kaylee says YOPEY Befriender “really opened my eyes to the lives older people have led”.

Kaylee was at university when she heard Roy had died. His family invited her to the funeral and Roy’s life story was a feature at the wake and some of its content was used in the eulogy.

Kaylee said to YOPEY: “Thank you for providing me with the opportunity to meet such a wonderful man.”